It's Christmas Eve and A Joyful Cottage is breaking to celebrate our Savior's birth. I thought this would be a great time to revisit Shabby Chic Retreat, the third post from the Living Large In Small Spaces series. Shabby Chic Retreat remains the most popular post not only in the series (it has received over 106,000 views), but the most popular of all my blog posts ever.

I first featured Shabby Chic Retreat on October 4, 2014. If you missed it then, you're in for a treat. And for those of you who have already seen it, sit back and enjoy the tour of Tonita's fabulous space once more. There's so much to enjoy.

Merry Christmas to all!

"And suddenly there was with the angel a multitude of the heavenly host praising God and saying,
'Glory to God in the highest and on earth
peace among those with whom He is pleased.'"
Luke 2:13-14


"A Tiny place of enchantment
where my heart is able to sing."
(Words from Tonita's blog Shabby Chic Tiny Retreat)

When I first saw Tonita's Shabby Chic Tiny Retreat it was love at first sight. If ever there was a reason for me to do cartwheels over a truly tiny house this is it.


Never mind that this little cottage possesses a teapot just like mine.


A tiny house is built

Tonita had been looking at tiny houses for years when in November 2010 she found tiny house builder Scott Stewart of Slab Town Custom Homes in Arkansas.


At the time Scott was offering special pricing on The AnneMarie tiny house model.  Tonita contacted Scott and after several phone conversations about customization possibilities she ordered her own tiny house.


Although 2,000 miles separated Tonita from her builder and house, she was involved in every aspect of the home's design and construction. "Working with an out-of-state builder is not for everyone," she says, "but with computers and phone communication it makes it easier.


"I originally was going to use a normal home style toilet, but once it was sitting next to the bathtub it was easy to see in the pictures Scott sent me that it was just too cramped. . .I opted to use a RV low water toilet instead.  It has a full flush that mimics a normal toilet."

The toilet can be tied into a sewer line or a holding tank.

To help her visualize the home's interior while it was being built Tonita marked out an 8' x 18' area in her garage with tape.  "I  cut out cardboard pieces the size of my very tiny bathtub, toilet, bathroom sink, refrigerator, kitchen sink, stove top and counter space," she explains, "and placed them along the floor to mimic the layout of my tiny home."


Scott left the interior wood unfinished so Tonita could paint it as she desired.  The flooring is Allure Trafficmaster.

By the end of November construction was complete and Scott moved Tonita's house from Mountain View, Arkansas to Springfield, Missouri.

From there a friend transported the house to Tonita's land.


Tonita was "waiting with paint brush in hand" when her house showed up.


The house is 8' wide x 18" long and has an 8' x 6' front porch.  Even with the cost to transport the finished house from Arkansas to Washington state, Tonita says her tiny house was a "great deal".

Tonita stresses the importance of using a standard size front door in a tiny house. "Not so skinny people can feel uncomfortable crunching through some of the tiny front doors used on many tiny homes. This will provide your  guests as well as yourself a more comfortable entry into your tiny abode. It will also allow you to move in a table that will seat up to four guests comfortably, that is if you build your home at least eight feet wide by eighteen (ish) feet long. Of course, there is always an option to purchase a table with removable legs or a fold down compact table and chairs in order to move it through a tiny door that is not a standard size. However, with tiny non-standard front doors your furniture options become a bit more limited."

Filled with her vintage and shabby chic decor, Tonita's tiny house is now a romantic retreat. She jokes that the cottage has been "girly-fied".

Mismatched chairs and a wicker table keep the mood relaxed. The little table was a "free" roadside discovery that Tonita brought home and painted white.


Walking through the door of Tonita's tiny house would be like entering a fairy tale.  One could imagine this as a cottage belonging to a princess.


There's a sense of timelessness and enchantment in every detail.

Make no mistake, though.  The house is equipped with modern conveniences.


The kitchen has ample counter space for preparing meals.


The shelf unit's ladder can easily be removed and used to access the two sleeping lofts.

The guest loft is above the reading nook and bathroom. 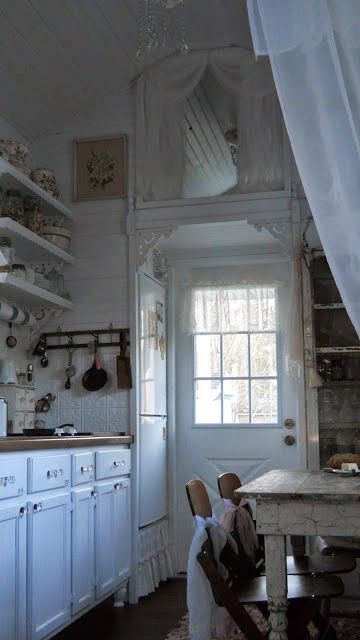 The master loft is above the front entrance.


Tonita furnished the master loft with a double bed, although a queen would fit, too.

The reading nook is fitted with a comfortable chaise lounge, an abundance of pillows, and a throw for curling up with a good book or settling in for a nap. 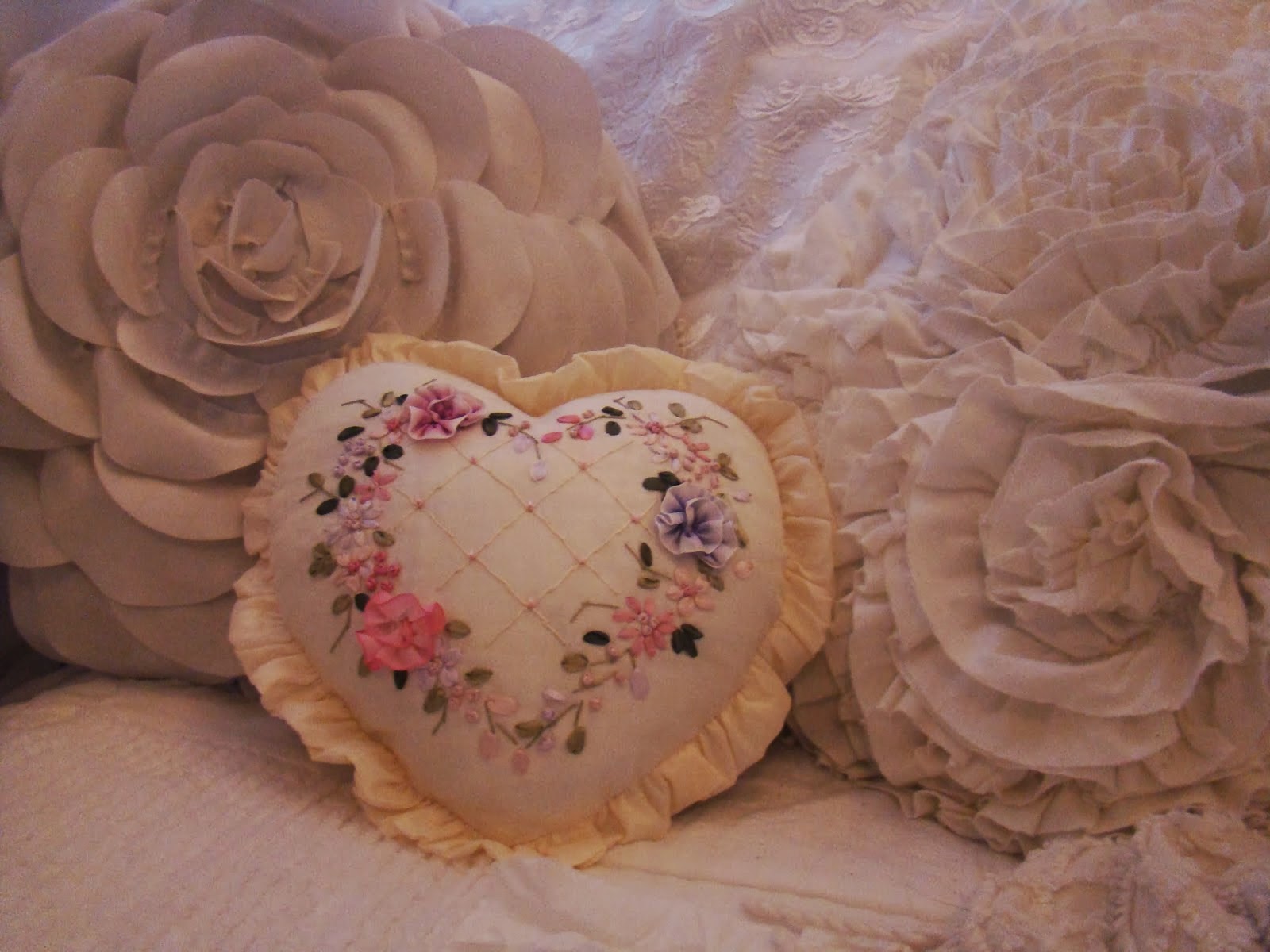 Just enjoying the lovely view of Tonita's property is an option, too.

The reading nook's chandelier is one of nine that hang in Tonita's tiny house.

Tonita dressed up a built-in wall heater by placing a faux fireplace in front of it. The mantel was made from an old chippy door. 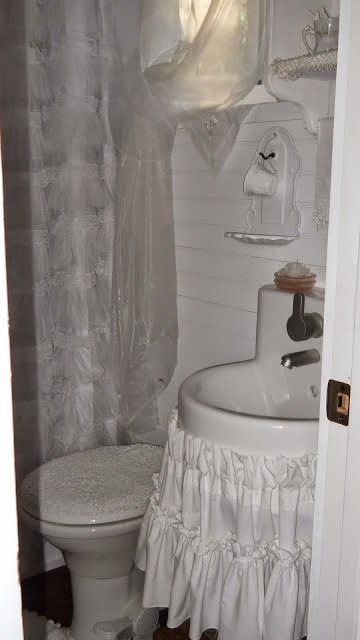 The delightful bathroom is unabashedly frilly. 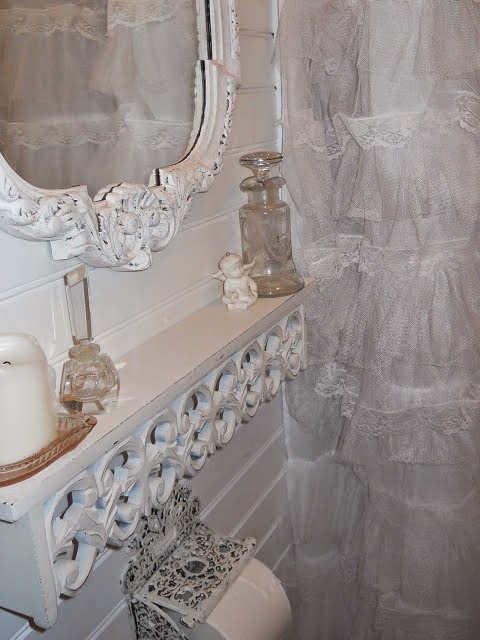 
She hosted an "I'm Dreaming of a Pink Christmas" party for four friends in her tiny house, planning ahead of time how she would accommodate winter outerwear. "A large vintage coat and hat rack inside my bath tub area held the guests' large, bulky and dripping winter coats," she explains, "while their purses sat inside my little bathtub."


For seating she uses old theater chairs that fold flat when not in use.

While Tonita was waiting for her tiny house to be built she repurposed an old playhouse into a chicken coop for her rare breed lavender Orpington chicks.

The coop interior includes a chandelier, washable wallpaper and chicken art on the wall.  An old milk can stores organic chicken feed. "A vintage tractor seat makes a nice place for me to sit and hang out in the coop and watch my little chicks grow," Tonita explains.

Tonita found old table legs ($1 each) and added them to the nesting box to give it "the look of freestanding furniture."  The hens' names are painted over the nests "just in case [they]start to squabble over what space belongs to them."

An enclosed chicken run -- accessed from the coop - was added later.

Tonita stows seasonal decor and other possessions in her storage shed. "Even in a tiny house I feel it is important to be able to change out furniture and décor," she says. "I could not imagine living day in and day out, year in and year out with the same stuff in the same place all the time. I would go stir crazy and be bored to death."

Tonita made over the original plain storage unit to give it a cottage look.  Here's a rundown of budget-friendly materials she used for the project:

Tonita has created a charming, one-of-a-kind homestead.  I asked her if she had anything she wanted to say to those considering a tiny house. Here's what she wrote:

"What I would like to say to people interested in downsizing or shifting to a small or tiny home is this… There are no rules to tiny or small home living.  Just because you live in a tiny space you DO NOT have to be a minimalist or get rid of everything you own.  I think it is important to fill your space with the things that make your heart sing, and you can have a storage unit or outbuilding to store items and then rotate them in and out with the change of your mind or the seasons.

Also tiny homes may provide a mortgage free living option for you but remember they are still illegal to live in  (due to size regulations) in most areas of the United States.  Do your homework before you build a tiny home."

Great advice from someone who's living large in a small space. 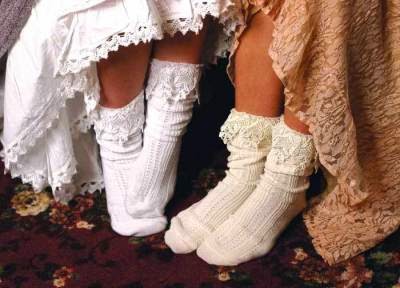 Thank you, Tonita, for sharing your tiny house and Le' Chicken Chateau with us.
(All photos are the property of Tonita and used with her permission.)

Since this post was published, Tonita has moved from Washington state to the Appalachian Mountains where she purchased a "really old" 570 sq ft farmhouse. She blogs about her farmhouse, country life and her tiny house (which she moved with her to North Carolina) on her blog" Shabby Chic Tiny Retreat.

Join me next Saturday for another post in the special series