This week's featured small space is a beach house in Santa Cruz, California that may surprise you. 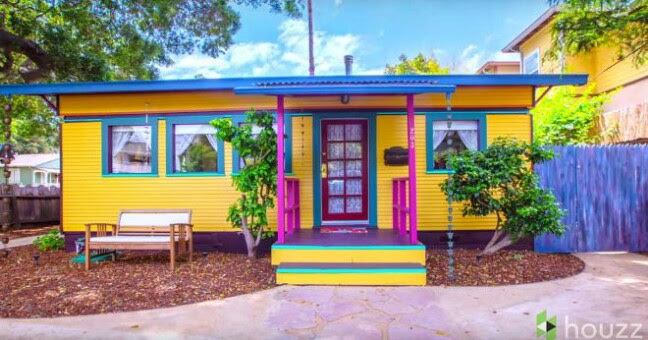 Welcome to the 108th post in the series
"Living Large in Small Spaces".


When Mary and Gerhard Ringel first saw the little house that would eventually become their home they had no idea what lie in store for them inside. From the outside it looked like an ordinary little beach cottage, but once inside Gerhard told his wife they were standing in a streetcar, and that, in fact, there were two streetcars that comprised the home. Mary was "blown away".

The two cars are covered by a regular roof, which explains why from the street one would never know the house is made from two decommissioned streetcars from the early 1900's. The two cars were set next to each other, with a 3½ -foot space connecting them. The first streetcar is comprised of the living and dining room. The second houses the bathroom, bedroom, and kitchen. An addition on the back extends the bedroom by 8 feet, bringing the total size of the home to 750 square feet. Quite a downsize for the Ringels, whose former home was 2,500 sq ft.


As this before photo shows, when the Ringels purchased the home it needed a lot of work.

The streetcar ceiling above the TV was sagging 2 inches which caused Gerhard to duck every time he came into the living room. He jacked up the ceiling himself and reinforced it with 2-by-8s.

When they moved in the streetcar windows were a faded acrylic plastic. Gerhard built light boxes with led lights inside. To create the look of stained glass he had acrylic panels cut in various sizes, then bought window film that has a faux stained glass pattern and he and Mary put the film onto the acrylic panels.

Next Gerhard built light fixtures to illuminate the panels from behind. The panels are equipped to change colors as desired, from blue moon to red sunset.

A daybed in the living room's nook serves as extra seating, or a bed for guests. 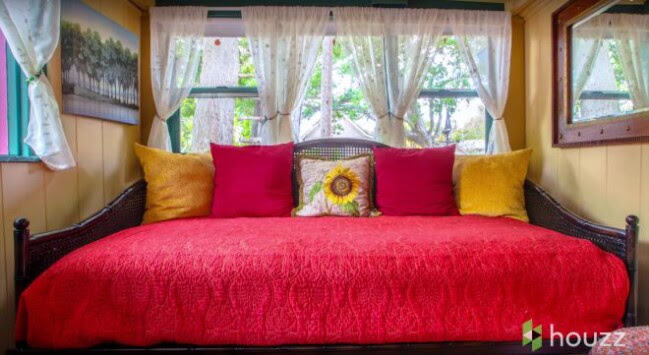 The Ringles removed all the flooring and installed hardwood in the living room and bedroom, and replaced rough red tiles below the gas heater with granite.


The cherry dining table is one they brought from their previous home. Gerhard cut it down to fit in their new dining space.


Above the doorway to the kitchen is an original cast iron bracket, one of many found throughout the streetcar structure.


The kitchen spans the 3½-foot space connecting the two streetcars as well as part of one of the streetcars. The ceiling was installed  by a previous owner, as was the tile on the floor and counter. Original to the home, the kitchen cabinets were repainted in white and apple green. When the Ringles took possession of the house the cabinets were painted orange, mint green and yellow.

Originally, the cottage was painted in "a lot of crazy colors. . .very Bohemian". The Ringles wanted to "keep the energy" which is part of Santa Cruz, but as grandparents felt they needed to tone it down a bit. The interior and exterior color palette was chosen with help from local artist and painter Gregory LeBaron, who also did all the painting.

They restored the clawfoot tub, and LeBaron created a custom paint and sponged it onto the sides. Gerhard designed and built the copper shower curtain rod to give the tub the feeling of more space.


Surface-mounted medicine cabinets were replaced with recessed ones and a pedestal sink was added.The door is original to the streetcar. “It makes a rumbling sound like rough wheels rattling over a metal track.” Out of respect for the history of the streetcar, they kept the door.


With the 8 foot addition, the bedroom in this small home is spacious. 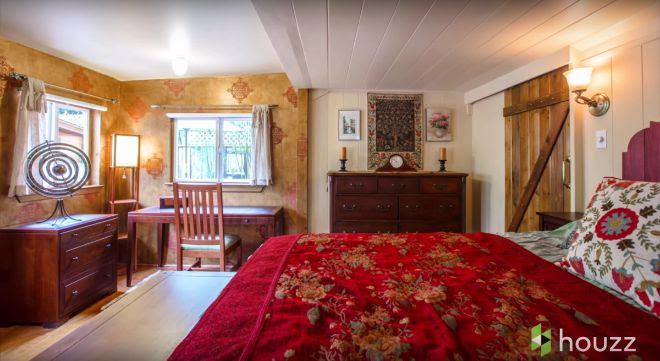 The door leads to the backyard. 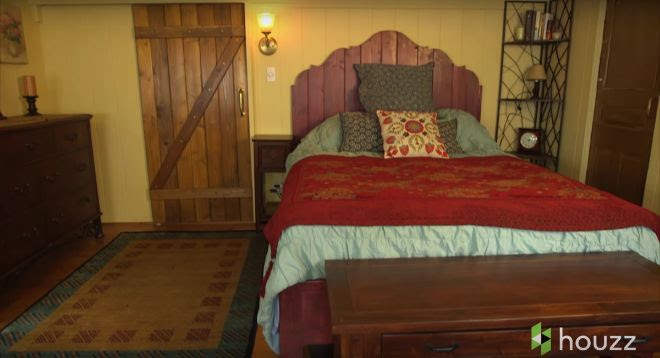 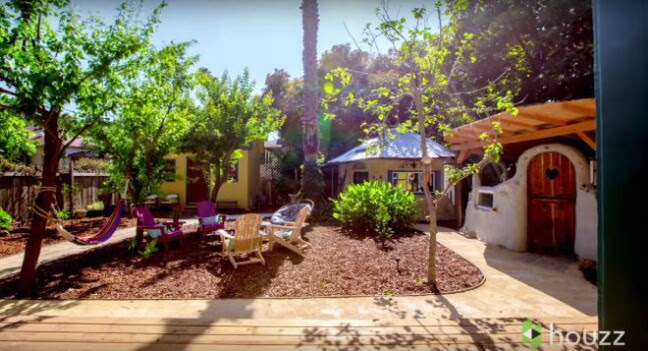 Cozy, cheery and full of charm. 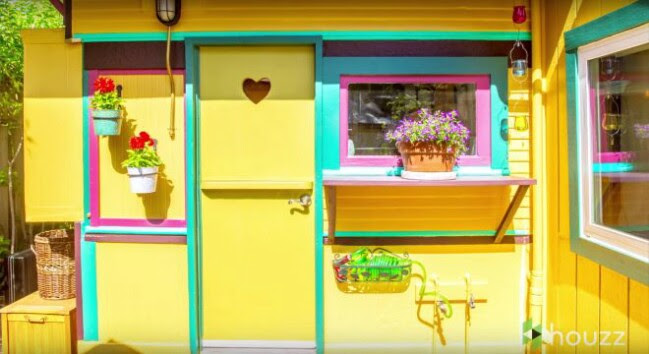 I love this funky little cottage.

You can see more of this home, including a video that gives a full tour of the home on Houzz here.


Join me next Saturday for another post in the special series